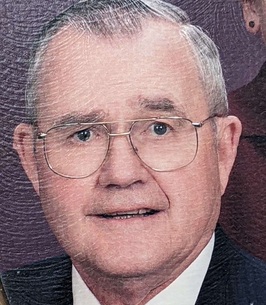 Arthur M. King, 89, of Bellefonte, passed away on Tuesday, April 5, 2022, at Mount Nittany Medical Center in State College. Born on November 8, 1932, in Sunbury, he was the son of the late Charles and Naomi (Armstrong) King. On August 30, 1952, he married his beloved wife, Norma M. (Witmer) King, who survives at home after sharing 69 years of marriage together.

Art was a 1950 graduate of Milton Hershey High School. He worked for Ford New Holland from 1953 until he retired as their General Manager at the Belleville Plant in 1990.

Along with his parents, he was predeceased by a granddaughter, Erin King, two great grandchildren, Jermaine, and Jamil King, and his six siblings: Amy Birnley, Paul King, Gloria “Sis” Boyd, Joseph King, E. David King, and Donald King; he was the last of his generation.

Art was a member of St. John Lutheran Church in Bellefonte. Art traveled extensively for work throughout his career, but always enjoyed when he and Norma were able to travel together. The two of them took numerous trips over the years, whether they were on a cruise, a train, or in a car; his favorite being the Columbia and Snake River Cruise. He also dedicated much of his time to the Boy Scouts of America in his early years, being a scout leader from the time that his son, Roy, started in scouts, until well after he earned the rank of Eagle Scout. He stayed active in his community, teaching Sunday School at Bergstrasse Lutheran Church, serving on the church council, and cemetery committee. He was also a member of the Frata Hunting Club, and loved being outdoors, whether he was hunting – locally or taking hunting trips, fishing, or playing golf. Art was an avid reader, enjoyed Country Western music, and playing cards. He and Norma also were a part of several dinner groups with their friends and looked forward to when they would go out and catch up with one another.

Friends will be received on Monday, April 11, 2022, from 10:00-11:00 A.M., at Wetzler Funeral Service, Inc., 206 N. Spring Street, Bellefonte. Funeral services will immediately follow at 11:00 A.M., at the funeral home, with Pastors Will and Elisa Osman officiating. Burial will be private at the convenience of the family.

In lieu of flowers, memorial contributions may be made in Art’s memory to the Pennsylvania Association for the Blind at www.pablind.org/donate-online/ or to St. John Lutheran Church, 216 McAllister Street, Bellefonte, PA 16823.