To share your memory on the wall of Charles \"Buck\" Fleming, sign in using one of the following options:

Buck attended the Germantown Academy and graduated from Lafayette College with a Bachelors degree. He served in the United States Marine Corps.

In addition to his wife, Dorothy, he is survived by their two sons, Kevin Fleming (Laura), and Craig Fleming, and seven grandchildren.

Along with his parents, he was preceded in death by his only sibling, Robert Fleming.

Funeral services and burial will be private at the convenience of the family. Arrangements are under the direction of Wetzler Funeral Service, Inc. in Bellefonte.
Read Less

To send flowers to the family or plant a tree in memory of Charles "Buck" Fleming, please visit our Heartfelt Sympathies Store.

We encourage you to share your most beloved memories of Charles "Buck" here, so that the family and other loved ones can always see it. You can upload cherished photographs, or share your favorite stories, and can even comment on those shared by others.

Posted Feb 20, 2021 at 03:57pm
Very sad to learn of the passing of my good friend and colleague of 65 years. “Bucky”and I attended Lafayette college in 1955 and were brothers of Sigma Nu Fraternity. Many of our frat brothers went on to have very successful careers but no one came close to achieving the brilliant career and achievements of my good friend Bucky.
Comment Share
Share via:
MH

Posted Feb 13, 2021 at 08:14am
He always had a smile whenever I talked to him. Sorry for your loss Dorothy, Kevin and Craig. Will miss his smile at the reunions.
Mary Harter
Comment Share
Share via: 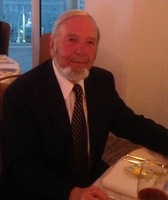