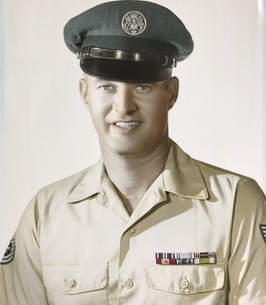 Born in Lewistown, Pennsylvania, on March 25, 1935, he was the son of the late Charles C. and Kathryn M. (Russler) Osborne. Donald grew up in Burnham and attended Lewistown High School where he enjoyed playing sports. After high school, he yearned to enlist in the military so he could serve our country during the Korean War, and to follow in the footsteps of his father and oldest brother. He enlisted in the US Air Force in 1953.

While in the USAF he had the great fortune of being stationed at Turner AFB in Albany, Georgia, where he became friends with Theodore “Ted” Ranio, a fellow serviceman at Turner AFB, who was also from central Pennsylvania. Thanks to Ted he met the rest of the Ranio family, including the love of his life, Florence Ranio. Donald and Florence were married on June 6, 1959, at St. John’s Catholic Church in Bellefonte, PA, and they enjoyed 62 years of marriage together.

Donald made his first career the US Air Force, proudly serving for 20 years, and retiring in 1973 at the rank of Tech Sergeant. He served in the Security Police and spent 10 years abroad, including a year in France at Toul-Rosieres AB; 8 years in West Germany at Ramstein AB and Rhein-Main AB; and a 1-year tour of duty in Southeast Asia during the Vietnam War. He and Florence would often reminisce about the wonderful times they had when stationed in West Germany and their travels around Europe.

Following his retirement from the US Air Force, he and his family returned to Central Pennsylvania and lived in Bellefonte. He then made a second career working at Raytheon (formerly HRB Singer in State College), until he retired from full-time employment in 1998. For a few years in the early-1970’s he also worked part time as a policeman for the borough of Milesburg.

Soon after retiring from Raytheon, he and Florence moved to Sterling, VA to be near their son, David and daughter-in-law, Valerie. Never one to be idle, he worked a number of part-time jobs in the Sterling and Ashburn area, including 4 years as a Loudoun County school crossing guard, and 6 years with Nova Medical Group (now part of Inova) in Ashburn, Virginia until he finally retired at the age of 78 in 2014, in order to care for his wife.

He is survived by his loving wife, Florence Osborne, son, David, daughter-in-law, Valerie and two granddaughters, Hailey and Madison Osborne. Florence lives with her son’s family in Ashburn, VA.

He was preceded in death by his parents; by his brothers, William “Bill” Osborne, Marlin “Sonny” Osborne, Gary “Pat” Osborne; and by his sisters, Virginia “Janie” Tate, and Shirley Ritter.

Funeral Mass will be held on Friday, April 22, 2022, at 10:00 A.M., at St. John the Evangelist Catholic Church, 134 E. Bishop Street, Bellefonte, with Father Brian Saylor officiating. The graveside service, with full military honors, will immediately follow at St. John’s Catholic Cemetery. Arrangements are under the direction of Wetzler Funeral Service, Inc. in Bellefonte.

In lieu of flowers, the family requests a memorial donation to the COPD Foundation (https://www.copdfoundation.org/).