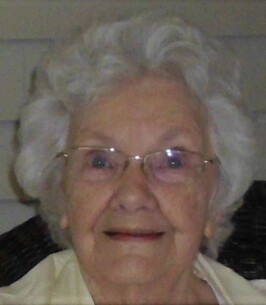 Mom was born in Bellefonte on July 5, 1928, a daughter of the late Leonard and Esther Kellerman Rhoads. On September 4, 1949, she married our father, Franklin Thomas, who passed away in 2007. She is survived by three children, Barbara (Karl) Peiffer, Janis (David) Smith, and Edward (Marcy Zimmerman) Thomas, all of Purdue Mountain. Mom is also survived by a sister, Hazel Markle of State College. She was preceded in death by brothers and sisters-in-law, Leonard (Mildred) Rhoads and Thomas (Doris) Rhoads; sisters and brothers-in-law, Marie (Fred) Lucas, Ruth (Charles) Smith, Pauline (Ralph) Stonebraker along with an infant sister, Alice. She is survived by a sister-in-law Margery (Willard, deceased) Thomas McMurtrie of State College.

Mom was a dedicated wife, mother, and grandmother; she was a terrific cook and seamstress. She never lost her sense of humor. Mom (Gram) was very close to her grandchildren and great-grandchildren, Kelly Praskovich and her sons Triston and Connor of Bellefonte, Craig (Jamie) Praskovich and their daughters Logan, Kensley, and Avery of Centre Hall, Melissa Thomas of Hollidaysburg and Rachel (Cole) Myers and their daughters Quinn and Johana of Erie along with numerous loving nieces and nephews. She also has two step-grandchildren, Lacie (Chris) Devine of Stamford, CT, and Cody (Rachel) Smith and their daughter Aspen of Bellefonte.

Mom was a 1946 graduate of Bellefonte High School. As a member of the Faith United Methodist Church of Bellefonte, she enjoyed cooking at the weekly football dinners and the friendship of many parishioners. In previous years, she was active in the Otterbein United Methodist Church of Mount Wolf, volunteering as a Sunday School teacher and Youth Fellowship leader. When we were young, mom volunteered as a brownie leader and cub scout den mother.
Mom and Dad relocated our family from Bellefonte to Aberdeen, MD; New Castle, DE; Pottstown, Easton, Scranton, and Mount Wolf, PA. In 1969, the family returned to Bellefonte. After holding several retail positions, Mom worked as manager of Yaffa Fabrics and Roaring River Mills, both of State College.

A memorial service will be scheduled at a later date; following cremation, burial will be at a private gathering of the family.

Memorial contributions may be made to the Faith United Methodist Church, 512 Hughes Street, Bellefonte, PA 16823.

Arrangements are under the direction of Wetzler Funeral Services and Victorian Crematory, Inc., Bellefonte.