To share your memory on the wall of James Brooks, sign in using one of the following options:

James was a 1959 graduate of Bald Eagle Area High School. He served in the United States Army from July 1960 until he was honorably discharged to care for his ill mother in July 1966. After his time in the service, he worked for J.H. France Refractories, where he was a supervisor, and remained employed for 30 years, before going to work for Miller Electric for another five years, and was a surveyor for Meeker Surveying for several years.

James was an active and devoted life member of the Marsh Creek Brethren in Christ Church, where he also served as the Associate Pastor. He served as part of the Honor Guard in Snow Shoe and surrounding areas, and was an active member of the Gideons for several years. In his spare time, James enjoyed hunting, fishing, bowling, and going on walks and rides in the mountains with his wife, Margie. During his downtime at home, he could always be found spending time with his faithful and beloved cat, Lexi.

A Memorial Service will be held on Saturday, March 20, 2021, at 2 pm, at Marsh Creek Brethren in Christ Church at 417 Summit Hill Road, Howard, with Pastor Dan Longmore officiating. Burial will be private at the convenience of the family. Arrangements are under the direction of Wetzler Funeral Service, Inc. in Bellefonte. Following CDC recommendations, social distancing is encouraged, and face coverings will be required at all services.

In lieu of flowers, memorial contributions may be made to Marsh Creek Brethren in Christ Church at 417 Summit Hill Road, Howard, PA 16841, or to Wetzler Funeral Service, Inc. at PO Box 7, Bellefonte, PA 16841, to help with funeral expenses.
Read Less

To send flowers to the family or plant a tree in memory of James A. Brooks Jr., please visit our Heartfelt Sympathies Store.

We encourage you to share your most beloved memories of James here, so that the family and other loved ones can always see it. You can upload cherished photographs, or share your favorite stories, and can even comment on those shared by others. 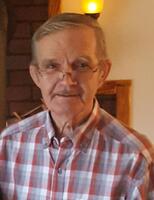