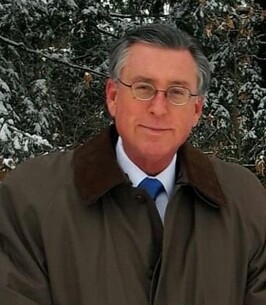 Mark S. Armagost, of State College, PA, passed away at his home on December 11, 2021, after fighting a rare, aggressive cancer. He exhibited his characteristic grace, humor, and kindness until the end.
He was born in Frankfurt, Germany on September 19, 1957. As the child of an Army family, he lived in Columbus, GA; Vincenza, Italy; Palmyra, PA; Lawton, OK; and Toledo, OH before the family settled in Annville, PA. He graduated from Annville-Cleona High School.
Mark had two careers. In his first, he rose from a dishwasher and short-order cook to become an executive chef, working in restaurants in Lebanon County, PA, Orlando, FL, Baltimore, MD, and Raleigh, NC. Later Mark earned Bachelor’s and Master’s degrees from North Carolina State University and became a fundraiser for land-grant universities in North Carolina, Virginia, and Pennsylvania, applying his talents to his fervent commitment to affordable higher education.
He is survived by his wife, Sally J. Sherman, and her daughter Dagny Felker; his father, Carl J. Armagost, and his wife, Helen Hanson; his sister, Karen Armagost and her wife, M.A. Sheehan; and a host of relatives and friends. His first marriage to Jeannie Sheedy Armagost of North Carolina ended in divorce. He was pre-deceased by his mother, Jean M. Armagost.
His family and friends will deeply miss Mark’s sharp intellect and quick wit, his gentleness, and his love of dogs, fishing, cooking, bourbon, music, and a good debate.
“Love thy neighbor” was a guiding philosophy of Mark’s life. In honor of this commitment, donations in his memory may be made to Think We Not Me of Boalsburg, PA - thinkwenotme.org - or to the neighbor-loving organization of your choice.
A private memorial service will be held at the convenience of the family.
Arrangements are under the direction of Wetzler Funeral Service, Inc., & Victorian Crematory.
Online condolences may be made to the family at www.wetzlerfuneralhome.com