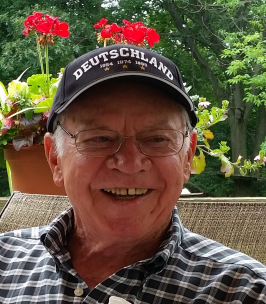 Marlin David Holderman, 91, of Bellefonte, passed away on Friday, April 1, 2022, surrounded by his family, at Harmony in State College. Born on November 22, 1930, in Bellefonte, he was the son of the late Emery and Mildred (Tierney) Holderman. On February 16, 1952, during a blizzard, he married the love of his life, Mary Jane (Gentzel) Holderman, who survives at home, after sharing more than 70 years of marriage together.

Marlin was a 1949 graduate of Bellefonte Area High School. He proudly served his country in the United States Air Force from December 1951 until he was honorably discharged in September 1953. After his time in the service, he attended St. Francis University, where he received his bachelor’s degree in 1958. He worked as the Director of Accounting Operations at Penn State and retired after 35 years of service. He was the inaugural recipient of the Charles R. Chambers Award in 1980 in recognition for his contributions to the Corporate Controller organization and the University community.

He was preceded in death by his parents and one sister, Phyllis Ream, and two brothers, Charles, and Donald Holderman.

Marlin was a member of Faith United Methodist Church in Bellefonte, Bellefonte Elks #1094, Lodge #268 Free and Accepted Masons of Bellefonte, and the American Legion Post #245. Marlin loved the outdoors and in his earlier years enjoyed playing softball and golfing at Penn State – where he made a hole-in-one. He was a true family man and loved vacationing with his family at Ocean City, and the Outer Banks. After retiring, he and his former co-workers from the University would gather every Wednesday at McDonalds/Wegmans for coffee and camaraderie.

Friends will be received on Tuesday, April 5, 2022, from 10-11 A.M., at Faith United Methodist Church, 512 Hughes Street, Bellefonte Funeral services will begin at 11 A.M., at the church, with Rev. Andrew Morgan officiating. Burial will be private at the convenience of the family. Arrangements are under the direction of Wetzler Funeral Service, Inc., of Bellefonte.

In lieu of flowers, memorial contributions can be made in Marlin’s memory to Faith United Methodist Church, 512 Hughes Street Bellefonte, PA 16823, or The Wounded Warrior Project at www.woundedwarriorproject.org