To share your memory on the wall of Norman \"Dick\" Richard Harvey, sign in using one of the following options:

Dick was a 1942 graduate of State College High School. He went on to serve in the United States Navy from May 1943 until he was honorably discharged in April 1946. He served two years in the South Pacific as a signalman (SM 2/C) on a LST (Landing Ship-Tank). During his time in the service, he was awarded the Asiatic Pacific Medal, American Theatre Medal, Philippine Liberation Ribbon, American Theatre Medal, and the Victory Medal.

Dick graduated from Penn State with his bachelor’s degree in 1950. He began his employment in the sales division of the former Titan Metal Manufacturing Company (currently known as Cerro Metal Products Company). He retired in July 1990, as the Manager of Marketing Services.

There will be a public graveside service with full military honors held on Friday, May 28, 2021, at 10am, at St. John’s Catholic Cemetery in Bellefonte, with Deacon Thomas Boldin officiating. Arrangements are under the direction of Wetzler Funeral Service, Inc. in Bellefonte.

To send flowers to the family or plant a tree in memory of Norman "Dick" Richard Harvey, please visit our Heartfelt Sympathies Store.

We encourage you to share your most beloved memories of Norman "Dick" Richard here, so that the family and other loved ones can always see it. You can upload cherished photographs, or share your favorite stories, and can even comment on those shared by others. 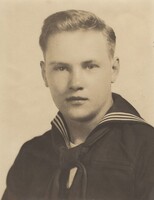