To share your memory on the wall of Randy Greene, sign in using one of the following options:

Randy was a 1971 graduate of Bellefonte High School. He worked as a maintenance worker for Graymont Lime until his retirement in 2001.

In addition to his wife, Debra, and mother, Mary, he is survived by one son, Nathan, and one daughter, Angela Clark (Jim); sister, Holly Keen (Bruce), his mother-in-law, Shirley L. Grove, and his grandchildren: Austin Greene (Tori Clouser), Colton, Kaden, Gavin, and Raelynn Clark. Dakota Harpster has always been a special part of the family. Randy also leaves behind his faithful canine companions, Shaggy, Bentley, and Bailey, and numerous nieces and nephews.

Along with his father, he was preceded in death by one son, Brett Greene, brother, Kenneth Greene, Jr., and father-in-law, Howard Grove, Sr.

Randy’s life was not about where he worked. His life was about who and what he loved. His love ran incredibly deep for his family, from always protecting and looking out for the welfare of his parents, to enjoying the small precious moments with his grandchildren. He loved his kids and grandkids; spending time with them meant the world to him. He was his grandkids’ #1 fan in all that they did, whether it meant he was cheering them on at their sporting events or proudly watching their performance at their choir concerts. The past few months, he cherished the time the grandkids would come over and babysit Pap and the dogs. He was an avid potato gardener and loved his food – especially baked potatoes and French fries. He had a workshop where he made wooden whirlygigs, crates, and anything else – if he found a pattern, he was making it! Randy kept the hummingbirds busy on the front and back porch, while he sat on the swing and watched them come and go. He spent countless hours on that front porch swing with the grandkids, from the time they were babies up until now. He looked forward to his routine of going to breakfast at the Waffle Shops and Wal-Mart with friends. He was always quite the talker and could strike up a conversation with total strangers. Randy found humor in almost anything. He would talk on the phone to his friends nearly every night while watching Andy Griffith and Gunsmoke reruns. He will truly be missed by so many.

Memorial contributions may be made in Randy’s memory to the Juvenile Diabetes Research Foundation at 3009 Market Street, Camp Hill, PA 17011.
Read Less

To send flowers to the family or plant a tree in memory of Randy Greene, please visit our Heartfelt Sympathies Store.

We encourage you to share your most beloved memories of Randy here, so that the family and other loved ones can always see it. You can upload cherished photographs, or share your favorite stories, and can even comment on those shared by others.

Allan Corman sent flowers to the family of Randy Greene.
Show you care by sending flowers

Posted May 15, 2021 at 09:52am
I am so very sorry for your loss. I always talked to Randy at the Waffle shop. My thoughts and prayers go out to your entire family.
Comment Share
Share via:
AC

I am so sorry for your loss. I know he will be dearly missed. Please reach out if you need anything. Heidi Martin 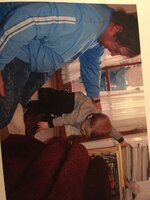