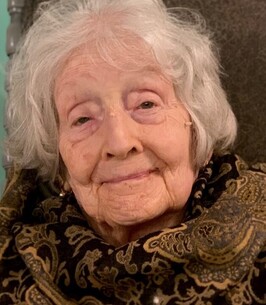 Ruth E. Beik of State College passed away on December 6, 2021, at age 100. She was born March 24, 1921 in Tarentum, PA, the second of four children of the late Donald and Julia (Keller) McVay. Ruth graduated from Kenmore High School, Kenmore, NY in 1939, and she attended D’Youville College, Buffalo, NY, for two years.

In 1942 Ruth married Daniel Kevin Foley, a pilot in the Army Air Corps who died during overseas service in 1944. They had one daughter, Donna. During World War II as a young widow, Ruth cared for her newly widowed father, her teenaged brother, and her infant daughter in Buffalo. In 1949 Ruth married Leland Larson Beik, who adopted Donna. The new family moved to Shanks Village, NY, where Lee worked on his doctorate at Columbia University and daughter Carol was born. They then moved to Fayetteville, Arkansas, as Lee’s teaching career took off, and had a third daughter, Janet.

In 1956 Ruth and Lee moved once again, to State College, PA, where they remained for the rest of their lives. Lee joined the College of Business Administration at Penn State, and Ruth took care of the growing family, including three more children, Paula, David and Linda. A logistical expert and thrifty homemaker, Ruth orchestrated schedules for Lee and six kids and saved money for college funds, all on one salary and with only one family car. Her home was a center in the neighborhood where other mothers drifted to ask Ruth’s advice, and where kids would stop by to try to snag a glass of lemonade or a homemade chocolate chip cookie. As the children grew older, Ruth had more time for playing bridge, exercise classes, knitting and sewing. She was famous for knitting sweaters and making red flannel nightgowns for Christmas, and later afghans and baby clothes, cherished possessions for many who received them. When Lee retired from teaching in 1986, he and Ruth traveled around the country to see the sights, but more importantly for Ruth, always to visit family members in other states.

Ruth was an active member of Our Lady of Victory Catholic Church and a member of the Senior Club of the church until she became too frail to participate.

Ruth was preceded in death by her husband of 63 years, Leland Beik; her daughter Carol Mack; and her siblings: Helen Brush, Mary Spaulding and Donald McVay. She is survived by her daughters: Donna Wulff, Janet, Paula (Evan) and Linda Beik; her son, David (Patti) Beik; and five grandchildren: Megan Wulff, Daniel Mack, Samantha, Allison and Peter Beik; and a large extended family of cousins, nieces and nephews.

A memorial mass will be celebrated at Our Lady of Victory at a later date. Arrangements are under the direction of Wetzler Funeral Service, Inc. in Bellefonte.

In lieu of flowers, Ruth asked that contributions be made to Our Lady of Victory Catholic Church, 820 Westerly Parkway, State College, PA 16801 or a charity of your choice.