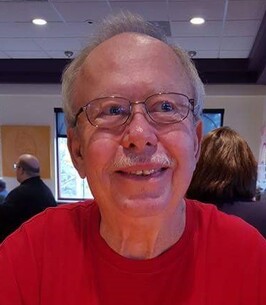 William “Bill” M. Frantz, affectionately known as “Chubby”, 74, of Port Matilda, passed away peacefully at home on Thursday, April 21, 2022, after a long illness. He was the son of the late Merel “Jack” and Dorothy Watkins Frantz. He married the love of his life, Karen Barlett, on February 4, 1967, who survives at home after sharing more than 55 years of marriage together.

Bill was a 1965 graduate of State College High School. He proudly served his country in the United States Army from 1966 until he was honorably discharged in 1972. After his time in the service, he worked for the Borough of State College public works for more than 37 years until he retired. He then went to work for Benner Township for 10 years and Stauffer Transportation for three years.

In addition to his wife, Karen, he is survived by his sons, Bill (Barb) and Denny (Amy) Frantz, and daughter, Brenda Belko (Mike). He is also survived by his grandchildren, Bradley, Kara, Drew, and Kayle Frantz, Christopher and Logan Belko. Also surviving is a brother, Tim, and three sisters, Cathy Coman (Steve), Teri Hanscom (Adam), and Brenda Webb (Mike), and best friend and cousin, Dan Frantz.

Along with his parents, he was predeceased by his sister, Donna and brother, Steve.

Bill was a member of the Patton Township Lions Club, State College Legion and Halfmoon Christian Fellowship Church. He was an avid outdoorsman and lived and loved to hunt and be in the woods with his family and friends. His passion was hunting muzzleloader. Bill also played slowpitch softball for many years at Baileyville and Hess Fields. He was a pitcher for Hawbaker’s softball team for 30 years.

Bill’s family would like to thank all the caregivers who have assisted with his care over the past 3 years. He spent time at Mount Nittany Medical Center, Juniper Village, and Centre Crest. Many thanks to the home healthcare staff, Centre Life Link and various EMT’s that provided wonderful care for Bill as his health declined.

Friends will be received on Sunday, April 24, 2022, from 6:00 – 8:00 P.M., at Halfmoon Christian Fellowship Church at 1776 Halfmoon Valley Road, Port Matilda (Stormstown). An additional time for the family to receive friends will be held on Monday, April 25, 2022, from 10:00 – 11:00 A.M., at the church. A memorial service will immediately follow at 11:00 A.M. with Pastor Clayton Kessling officiating. Burial will be private at the convenience of the family. Arrangements are under the direction of Wetzler Funeral Service, Inc. in Bellefonte.

In lieu of flowers, memorial contributions may be made in Bill’s memory to the Halfmoon Christian Fellowship Church, 1776 Halfmoon Valley Road, Port Matilda, PA 16870.