To share your memory on the wall of Richard F. Fisher, sign in using one of the following options:

Provide comfort for the family by sending flowers or planting a tree in memory of Richard F. Fisher

Provide comfort for the family by sending flowers or planting a tree in memory of Richard F. Fisher

Richard was a 1955 graduate of Bellefonte High School. He was the owner/operator of the Sunoco Service Station and Towing Service in Lamar for many years. He then went to work for John Spearly Construction from where he later retired.

In addition to his wife and parents, he was preceded in death by one sister and one brother.

Funeral Services and burial will be private at the convenience of the family. Arrangements are under the direction of Wetzler Funeral Service, Inc. in Bellefonte.

Online condolences may be made to the family at www.wetzlerfuneralhome.com.
Read Less

To send flowers to the family or plant a tree in memory of Richard F. Fisher, please visit our Heartfelt Sympathies Store.

We encourage you to share your most beloved memories of Richard F. here, so that the family and other loved ones can always see it. You can upload cherished photographs, or share your favorite stories, and can even comment on those shared by others.

Posted Apr 17, 2021 at 04:17pm
Extremely saddened to hear about the passing of Uncle Richard. I can still see his grin and twinkling eyes when we met at family gatherings, camp, and Grange Fair encounters. A warm embrace followed. He always seemed to be inwardly laughing at what he was about to say next! I enjoyed those conversations - playful bantering, updates on grandkids, childhood stories of his siblings from his point of view, and the Bellefonte happenings. We are praying for God's peace to be abundant over the entire family during this difficult time. 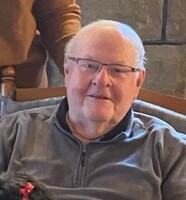